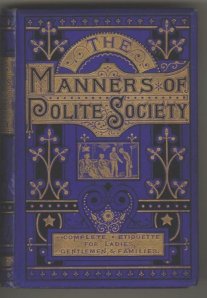 I’ve used this expression in good humour quite a few times over the past decade or so, mostly in response to a friendly and harmless comment from a male colleague or acquaintance along the lines of, “Goodnight, ladies” at the end of a day’s work, or at a function etc.

Mostly they laugh in a taken aback kind of way, or are horrified – or both, but one reaction overrules the other. And it’s a simple thing. I usually say, “to be a lady is a cultural construct, and I just don’t fit it: wrong breeding and basically just wrong behaviour. Woman I may be; lady I am not,” by which time the man involved is thinking, “Oh shit, how do I get out of this one.”

I don’t mean to offend any men, and I’m not offended by it, and it’s not a rabid feminist thing (I do shave under my arms). As I said today to the latest poor fellow to cop my load, so to speak, “Don’t worry about it, it’s my issue, not yours.”

But the interesting thing is that I used to work with a guy who I could banter with on an intellectual level on all kinds of things, including gender politics, but when HE did the ol’ “Goodnight, ladies” and I delivered my retort, it really floored him. HIS cultural upbringing overpowered his intellectual reasoning and he just couldn’t cope with it at all. I still think he thinks I’m an irrational female on that one – and perhaps (just perhaps) he’s right – but the point’s there to be made, and I make it.

Occasionally I’ve said it to women as well. Some get it, and it’s usually the ones of a certain age and a certain exposure to feminism /cultural studies / dickheads.

Often I get back – from both men and women – “so what CAN I call you then without offending you? Guys? Gals?” (and variants aplenty). You know what I tell ’em?

“How about my name. My name is just fine.”

Makes perfect fucken sense to me.