The inner weather girl got angry

Apparently the Dutch have a fascination for weather.  So my girlfriend told me once, and she reckoned it was because if you lived in a country that’s at risk of being submerged every time it gets a decent bit of rain, you’d want to check the weather pretty regularly too. She based her theory on being married to a Dutch man who is interested in weather, so I can’t vouch for its accuracy.

However, being half Dutch, I find there’s a bit of truth to be had from that sweeping generalisation.  I had a brief ‘Eureka’ moment when she said it because it sort of helped explain my lifelong interest in weather.

As a child, staying at Oma and Opa’s (my Dutch grandparents) during the holidays on the south coast of WA, heaven forbid if you even breathed loudly during the weather section on the ABC TV news.   Sometimes it was just better to try and hold your breath and creep out of the lounge room so you could think without being scolded.

Their predictable habit became a useful communication tool as I grew older, because now if I want to call Oma I wait until 7.31pm.  It used to be a dead cert I’d get her and she could then talk authoritatively about the weather to ‘break the ice’.  I say ‘used to’ because now, at 94 and with wireless TV audio direct to her hearing aids (yes!) it’s not so certain.  Mind you, she’s also got the digital desktop weather station alongside the crochet hooks and sidoku, so she still knows what temperature it is any time of the day or night. Just in case.

Moving on, during high school in geography classes I learnt some of the more formal parts of weather, which sort of helped explain the physics behind the ‘Dutchiness’ interest in weather. I say sort of because, I mean, really: 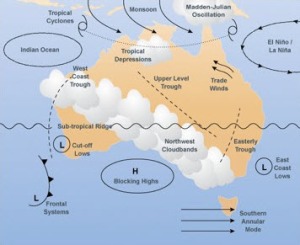 Fast forward 20 years or so, and I found myself at the Australian Broadcasting Corporation working for Local Radio in a regional studio – the serious domain of serious weather.  I did so enjoy reading the coastal waters forecasts *sigh*.  Now that I look back at it, that’s when I knew that a little weeny part of my cerebellum had personally and professionally fused.

And of course I was in the Pilbara, where cyclones are a real weather threat for six months of the year, when it’s not fricken hot for the other six months – note large dark red pimple on the north-west coast of WA which is where I’m talking about.

Broadcasting for prolonged periods of time under pressure, in a studio itself shaking and howling with the wind and the community relying on your ability to communicate information, is a serious responsibility – and one that remains up the top of the ‘Life Experiences Top Ten’ so far.

Which brings me, in a long and roundabout way, to a few weeks ago when Perth experienced one of its nastiest storms in recent times.  Where I live wasn’t affected badly, and I’m grateful.  Bearing this in mind, last week the weather bureau issued a severe weather warning for the metropolitan area because another storm was imminent.  In their advice they said no hail was expected (as per the freak storm), and no road weather alert was issued either. But they were obviously being cautious because Perthites were jittery.

Imagine my surprise then when I turned up to uni for my 5-9pm lectures, after having driven over an hour in drizzle-affected panicky traffic, to find my classes cancelled due to the weather.

Somehow 40-odd years of weather loving, cyclone experiencing, anti-weather-gang-mentality (I just made that up) indignation rose to the surface.

I mean, come ON!  You call that a storm?  This is the kind of storm I’m used to, when palm trees blow sideways and you can’t hear yourself think for the wind, and you finally see just why there are no roof gutters on Pilbara houses, because they couldn’t support the weight of rainfall.

Grrr.  As a Dutch person would say in the Pilbara, “Word taai, prinses.”

Now that I’ve got that out of my system, enjoy Bik Runga’s lovely song, Listening for the weather, which, not surprisingly, used to be on the ABC playlist!