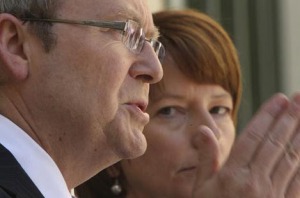 1.  of or having a fresh, healthy red color: a ruddy complexion.
2.  red or reddish.
3. British Slang. damned: a ruddy fool.

On a day when there was far too much talk about the colour of our new Prime Minister’s hair, it seemed a slipknot irony to see the former PM’s complexion, ruddy in its raw emotion during his “I’m very proud” speech.

But I think, simply, that had he been a better communicator and manager, he would have gone on to be remembered for all those things he’s very proud of – as well he should be – instead of the ignominy of being dumped in first term etc etc.

And I’m not alone in my thoughts.  Do a Google search on Rudd communication skills and see what comes up. The day before the dump, Ben Eltham wrote on ABC’s The Drum Unleashed about the former prime minister’s skills in this area. Richard Farmer, on Crikey.com:

Behind the downfall of Kevin Rudd there were clearly some issues about his style and technique of governing — his presidential, almost dictatorial, dominance of decision making with the concentration of power in his Prime Ministerial office; a fascination with playing as a world leader on an international stage; an almost pedantic concern at home about the process that led to innumerable reports and enquiries.

The best evidence of Rudd’s ‘technique of governing’ came in Julia Gillard’s first press conference as prime minister.  Marvel at the subtext:  she confirms that Rudd was not a team player, did not respect or trust his ministers, nor delegate appropriately to them, and confused discipline with being dictatorial.

Yeah, sure the power brokers exerted their influence. Yeah, sure it could happen again. Yeah, even sure it’s all about election cycles (there’s a word for it – policy short-termism or something).

But manage and communicate well and the power brokers will be happy, and maybe even the electorate, and some long-term policies can be implemented with net gains to the nation! Simplistic, I know, but imagine that!