So the washing machine repair man arrived to sort out the clunking and scraping that mysteriously began during a wash yesterday – which wasn’t coins or rocks or marbles on the inside of the drum. Five minutes later he was out of the laundry and at the kitchen bench: 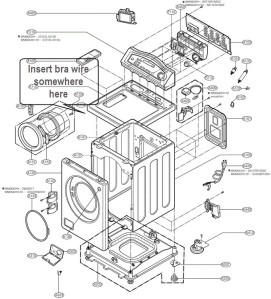 Off he went to the car.

Blondie: “Ooh, bra wire, how embarrassing!”
JB: “No, not at all – I bet it happens all the time and he’s seen it before. I’m just glad I can finish my washing.”

Back comes Mr WMRM to write his receipt on one side of the bench, while I write a cheque from the other.

He is around 45 with piercing pale eyes and a no-nonsense kind of Germanic attitude punctuated at odd moments with a half smile. Odd.

WMRM: “So I was lucky, the end of the wire was just poking out through one of the holes, and it was out quickly.”
JB: o O (yeah, nice 80 bucks).
JB: “I didn’t even think of that. And I felt across the drum too, to see if it was a coin or rock or marble or something.”
WMRM: “It was right up the front. Most people reach in towards the back.”